The Biggest Reason Why the Okinawan Diet Works

Okinawa, an island prefecture in southern Japan, stands out among a country that is already well known for longevity. They have a much lower rate of coronary heart disease compared to mainland Japan.

A separate study on Japanese centennials living in Okinawa, where the researcher went back and analyzed at what age these individuals were able to live independently (cook for themselves, do their own house chores, live in their own home, among other factors), came to another fascinating discovery: The study was only on 22 individuals, but among them, 82 percent were still independent at a mean age of 92 years and about two-thirds at a mean age of 97 years old — a lot of Okinawans don’t just live long, it seems they live long, active and happy lives.

There are many factors to a healthy life, but a big one is diet. In an interview with CNN, the researcher leading the study, Craig Willcox, shared that he found Okinawans typically eat seven different fruits and vegetables and 18 different foods a day, and more than 200 different foods and spices regularly in their overall diet.

How do they eat so many different kinds of fruits and vegetables? Isn’t 18 different foods a day a lot of food?

I thought to myself, how do they do this? Isn’t it difficult to get so many different kinds of vegetables and food in one day?

But if you consider one of the most common and famous Okinawan foods, a stir-fried vegetable dish called chanpuru, maybe this isn’t so impossible. Chanpuru means “to mix together” and can be a variety of different vegetables, but a classic version would include bitter melon (goya), tofu, egg, and bean sprouts, sometimes with carrots, cabbage, or onions. This is often served with a side of sweet potato and miso soup, which is frequently made with seaweed, tofu, and daikon radish. Okinawans also often enjoy a portion of fruit after or between meals, such as pineapple or papaya with some freshly brewed jasmine tea.

And this is why the Okinawan diet works: Their focus is on getting a large variety of fresh vegetables and fruit, rather than becoming hyper-focused on increasing your intake of one “superfood” vegetable or eliminating an entire food category that has been deemed “bad” by the public. Their meals are never just tofu or bitter melon, and they’ll frequently have rice or noodles, instead of just sweet potato. Their meals are often a colorful assortment of different vegetables and food types, of different colors and textures.

So don’t worry about eating more “superfoods” like kale, tiger nuts, or Indian gooseberries: The key to eating well is paying closer attention to the variety of fresh fruits and vegetables you eat in a day — seven a day, if you can.

Get to know visual artist Kaki Okumura, her food culture and lifestyle philosophy

About a year and a half ago I read  “Finally Getting in Shape: The Japanese Rule to a Healthy Diet”.    Kaki Okamura’s articles are published in Mark Bittman’s famed Heated, Medium and her own Read more… 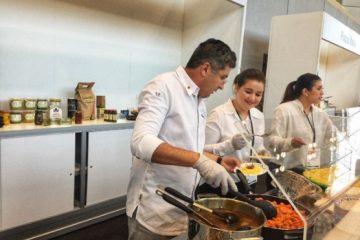